The first trailer for the follow-up of Split, the impressive last movie of directory M. Night Shyamalan is here, and as already previously announced, is a crossover and sequel of both Split AND Unbreakable, another great movie of the same director.  Returnig characters therefore are the titular Mr. Glass, portrayed by a sinister Samuel L. Jackson, David Dunn, interpreted by Bruce Willis, and last but not least Kevin Wendell, as seen in the movie Split, brought to life by James McAvoy in a truly acting tour de force. Also returning is Anya Taylor Joy, who was spared by The Beast at the end of Split, whereas a welcome addition to the cast is Sarah Paulson, last seen in The Post, which plays Dr. Ellis Staples, a  psychiatrist who specializes in “Superheroes delusions”. The stakes are really high for this is one, but will Mr. “Sixth Sense” Shyamalan be up to it? We can only wait, and hope for the best….

Here’s the San Diego ComicCon poster for the movie: 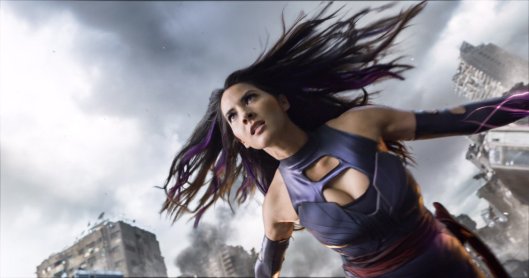 The final trailer of X-MEN APOCALYPSE is here, and it has good old Wolverine in it!
Mega-Hype!!!

Magneto, is my father

Here’s the SECOND  trailer for X-Men: Days of Future Past !!!
The 22th May is NOT that far after all….

The World’s End by Edward Wright

From the author of Shaun of The Dead and Hot Fuzz, here comes the third chapter  of the partnership of director Edward Wright with the actors Simon Pegg and Nick Frost. Martin “Watson” Freeman and Rosamund Pike join the party.

Psycological thriller with James McAvoy, Rosario Dawson and Vincent Cassel, from the director of Trainspotting, Slumdog Millionaire, Shallow Grave, and recently of the theater play Frankenstein, with Benedict Cumberbatch and Johnny Lee Miller, and of the Opening Cerimony of the 2012 London Olympic Games

Welcome to The Punch

A thriller with Mark Strong as a former criminal forced to return to London, where James McAvoy as a detective is wating a chance to finally catch him. Andrea Risenborough and Peter Mullan also in the cast.

Looks like James McAvoy has been busy this year…